It’s amazing that 13 years after the fall of Saddam Hussein’s Ba’ath and that political party’s complete evisceration swiftly followed by the entire country itself, it is still taboo to consider the idea that maybe shit was just better before. Not for the first time, I’m in trouble for suggesting Iraq under “Saddam Insane” (90s kids!?) was not just a charnel house for his political enemies but simultaneously, and for many more people, it was the best thing that ever happened to them.

This is the third time I am using this title on a blog. The first, in 2005, was on an ancap website I ran that was the bane of the libertarian movement. It was an argument against crypto-Republicans who were very upset about another post I wrote, the subject of which is clear from the title: “A Grim Milestone: 159,000 Troops Remain Alive in Iraq.” (Would I take a different tack in my old age, probably.) In the comment section one of these Koch-funded think-tank brats attempted to quantify how many lives the US invasion “saved.”

“The Ba’athist regime averaged 60,000 Iraqi murders a year. During the past 3 years, 60,000 Iraqi civilians have died. Even if the majority of those civilians were killed by American troops (and I dare you to claim they are, really, I do), by my grim math that’s 40,000 civilians/year x 3 years = 120,000 civilians we’ve directly saved due to our invasion of Iraq.”

This utterly ludicrous comment prodded me into performing an uncharacteristic task: math.

There is also some questioning of the 290K number — the Red Cross wouldn’t even back it up. From John Laughland: “Their report speaks of an estimated 290,000 missing, ‘many of whom are believed to have been killed.’ In other words, their deaths have not been established…”

Even current Iraqi politicians, who have an incentive to lie and exaggerate, say that Saddam killed a million people. That’s still 41,666 per year.

Pretty much all you had to do in Saddam’s Iraq was shut the hell up and mind your own business. Before sanctions, the economy was one of the best in the Arab world, women’s rights were light years ahead. That was before the US and UK bombed and sanctioned Iraq for 12 years, decimating the economy and causing at least a million to die due to malnutrition and limited access to basic drugs for easily-curable diseases. The US killed a million Iraqis before they ever stepped foot on that patch of dirt.

Add all this to the fact that the war is crushing the Iraqi economy, and that the insurgents are attacking precisely because the US is there, and you have a veritable holocaust — triggered by the United States of America. Furthermore, the insurgency is widely backed by the general population (or else it couldn’t exist). Journalists report civilians helping out, too. For example, a man who has lost a son to a trigger-happy hick will, after a long day of tending his date palms, plant a roadside bomb for US troops, and then head home to the rest of his devastated family.

The reason this is so important is because there are all kinds of people spouting off many different numbers, plenty of which seem to have come right out of their asses in an attempt to further demonize Saddam and make the US look like angels simply because they have killed less people. There are other factors to take into account, like the fact that the people who were killed by Saddam knew how to avoid it. They knew it was coming at some point (and just to preempt some of the simpleminded out there who think I’m praising Saddam — no, this did not make it okay). Saddam was the hurricane to the US earthquake.

The people killed by US troops and the insurgents attacking because of the former’s presence have absolutely no idea how or when or where they will be killed. The news is filled with stories about Baghdadis who never leave their house, and go out once a month on a militarily-planned run for food. I mean, this is great for concrete barrier and razor wire manufacturers, but I think most people familiar with the most basic economics know this puts the Iraqi economy squarely in the gutter — along with Iraqi life. Life under Saddam’s regime was immeasurably more enjoyable and normal than the complete disaster Iraqis are forced to suffer post-Saddam. Couples went on dates, women could wear what they wanted, bookstores had poetry readings at 2am, fine restaurants served gourmet cuisine, kids ran around the streets eating ice cream in the hot summers, and went home to their fully-electrified, air-conditioned home. It wasn’t London or Paris or New York by any stretch of the imagination, but it was infinitely more so than staunch US ally Riyadh. And that was WITH 12 years of sanctions that crushed Iraq’s poorest underfoot but which left Saddam unscathed.

I expanded a bit on this theme in 2011, mostly to gloat that I was right and to point out mainstream-media bias against the plain fact that Iraqis missed Ba’ath rule. I bring it up again because of an interaction I had with one of those cute young British soi-disant MENA experts who tweet a lot about places they’ve scarcely or never been.

Despite this being quantifiably true, it’s extremely rude to say. Hafidh’s tweets really aren’t so bad, but it seems his parents are Iraqi so he’s not having any “revisionism.”

Ohh yeah he was so pro-women's rights! While his son went around raping, drugging & killing young girls 😒👏🏼 https://t.co/nRLBaBbvdY 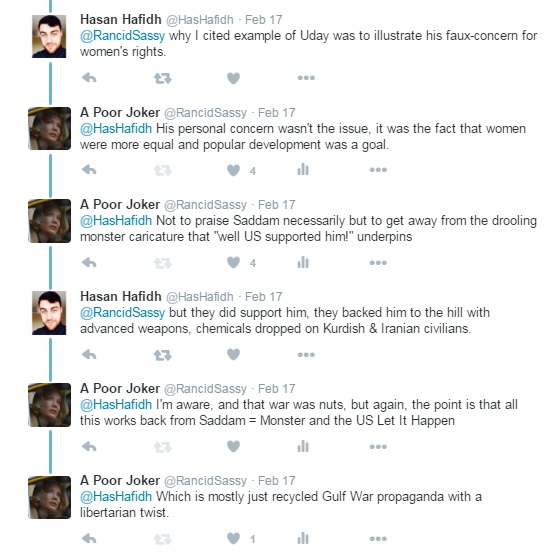 There are a few other branches of the conversation, which you may explore, but they’re not important. I was taken right back to 2003 when to be against the overthrow of the Iraq government was to be the new Nazis.

Anyway now I'm a Saddamite for pushing back against one-note drooling-monster narrative of Arab regimes.

An interesting discovery was, while looking a few things up for this post, I came across an article on the same subject which actually interviewed Hafidh on the arguments — from actual native Iraqis in Iraq — about whether or not Iraq was better off without Saddam.

“I wouldn’t refute for a minute the good that he did, in terms of infrastructure. Generally, in terms of gender equality, not bad,” said Hasan Hafidh…

Absolutely nothing I say about Saddam Hussein is meant to forgive his administration’s horrors. But once again — through the prism of imperialism — one might understand why governments Westerners would consider “oppressive” do what they do. A case in point is this documentary from 1989. Iraq had already invaded Kuwait — that innocent gas-thieving, caste-based oiligarchy — and George Bush I was ready to launch the Gulf War.

It’s remarkable because the American filmmaker was so nakedly hostile to the idea that Iraq was a decent place to live. His subjects clearly considered his leading questions dumb. “Do you love Saddam Hussein?” he’d ask. They’d look confused and reply something to the effect of “Uh, what? We love his principles, this is an important distinction. He is just a man.” And yes, there was a noted hesitation so as to not say the incorrect thing on record, and Ba’ath Party minders were always following the film crew, but with an enemy like the United States and war on the horizon, it’s no wonder they were concerned about messaging.

Also notable: a few years before gay issues would get positive mainstream attention in the West after being drowned by the AIDS crisis, Saddam’s Iraq had a flamboyant homosexual nightclub owner and fashion designer partying it up in a downtown chain hotel without a care in the world. If “Israel” is “moral” in 2016 for its trivial gay-rights gestures, certainly 80s Baghdad should get some credit.

What struck me most was the interviewer’s obsession with free speech, and the Iraqis attempting to explain in poor English to this apparent moron that verbal expression isn’t all there is. To explain why a society under constant imperial attack may have to curtail certain freedoms that could undermine development under that juggernaut is a herculean task.

I wonder how many of those people survived the truly abject horrors of the next twenty-five years, brought to them by Enlightened Western Civilization.

Thanks to @galterwlass for the video link and Phil Greaves for help finding a link about development stats.