I know, I just said I hoped I wouldn’t have to talk about this again. But in the hours after I hit “Publish,” so much crap has followed. The Tor project’s blog featured an earnestly melodramatic post in “solidarity” with Andrea Shepard. Paul Carr of Pando has been both-sides-ing the issue because it looks like someone higher up — a purse strings person, perhaps [see update] — has ordered this whole drama quashed. And Micah Lee of Tor and The Intercept — because that’s all that was really missing — wrote a very illuminating blog post encapsulating everything wrong with nerd thinking.

If you haven’t yet, please see the official Tor post. Many admirable general sentiments are expressed but none that really describe what Shepard, who is not named, “suffered.”

I don’t even doubt this is true, though I suspect any real threats would be issued by Anonymous 4channy types — the type Shepard probably considers to be comrades as evidenced by her weird network. That it has been said at this time, after so many have expressed horror at the attack on the livelihood of a critic, makes it seem as if they are charging this victim with having issued “serious, frightening threats.” This is the anatomy of a smear.

It’s one long, pablum-soaked justification of the doxxing of JB by hundreds of tech officials and hangers-on.

Lee’s post is a troll from the get-go, reducing all questions about Tor to Yasha Levine’s Pando reporting and repeating the bullshit smear that Tor critics think “you can tell everything about a woman because she dyes her hair.” The worst is the comparison to GamerGate using only the fact that the shameful behavior of Tor developers has been referred to on Twitter using the humorous #TorGate hashtag. I know some of these people are young, but they must know the “-Gate” suffix has been glued to tens or hundreds of issues over the years since the Watergate scandal. *gets down on one knee, takes child’s hand* “Yes, Micah, that’s where ‘-Gate’ comes from!” And that’s why this is yet another obviously calculated smear.

The Intercept connection is amusing here, since a good chunk of Lee’s argument was: “Pando didn’t find anything that wasn’t published on http://torproject.org.” Well, yes, but much of investigative journalism is often the arrangement of known facts to display a pattern. Previously unknown, hidden facts certainly make a story more compelling and certainly a better scoop, but that’s a matter of pride for the publication itself, not the reader. It makes sense for a guy who works for a news organization that will only report on the NSA using original source documents and only after checking with government officials. It’s an organization whose spiritual and editorial leader wanted to redact the name of the country of Afghanistan, in deference to “security” concerns. What better place for nerdkind to work with words, where any serious journalism is reduced to relying only on reams of documents liberated directly from the source and requiring none of the messy meatspace interpretation of other reporting.

Like Lee, Tor defenders in my mentions have repeatedly attempted to bring it back to the discussion of the raw math involved. This seems like a purposeful derailment, but having dealt with this particular sort of troll in my many years on forums, I think many of them seriously do not know another way to think. It’s never been about the code, for critics. That we say we do need to be able to have a modicum of trust in its developers is not ad hominem, it’s simply the noting of a legitimate concern for us potential end-users. I do not read code. I can barely add two double-digit numbers in my head. It is literally impossible for me to independently verify the soundness of any type of programming. This would make legions of tech types scoff and roll their eyes in dismissal at anything I have to say about Tor, and that is precisely my point. The vast majority of humans are in my boat (maybe they’re a bit better at basic math on the fly). If we have to trust our security to a bunch of smeary, whiny assholes, we probably just won’t.

To illustrate this point even better, David Golumbia — nice guy and computation expert! — notes that Tor, while surely based on the immutable substance called math, is not a “fundamental law of the universe.” The claim that it is, made by Quinn Norton (friend of weev, fan of doxxing) in a goofy “balance” piece Pando ran just to show they’re not too rabidly anti-Pentagon-tech, is “false, breathless narcissism and arrogance at its most outrageous, and very typical of our digital age,” Golumbia said. “The belief of Tor advocates that they are tapping into something over and above what the rest of us have access to is misbegotten and hubristic in the extreme,” he continued, and noted the “petulant, arrogant, dismissive, power-hungry reaction computationalists typically have when anyone they deem unworthy dares actually to ask them to account for themselves.” There’s a guy I think I can trust, and he says Tor is vulnerable now and possibly in ways we can’t predict in the future. [In the same vein, see Roasty’s “Math is Universal; Ethics Are Not“]

Pando‘s Paul Carr has taken a seemingly forced “even”-handed approach to the subject, positioning himself a bit above the fray with his categorical condemnations of the alleged harassment of Shepard. I say “a bit” above the fray because it didn’t stop him from bragging about Pando being under fire from powerful, scummy Uber as well as the jerks at Tor and Anonymous. Yeah, Pando must, as Carr says, be doing “something right,” but with this self-absolving piece that doesn’t even mention the actual victim who may yet lose his job, I’m trying to figure out what that might be. Some kind of directive seems to have been handed down from Pando‘s managers — funded by Silicon Valley investors — to cool it a bit and give lip service to social justice with the same insipid mimicry employed by the Tor bots. It’s boring but expected. 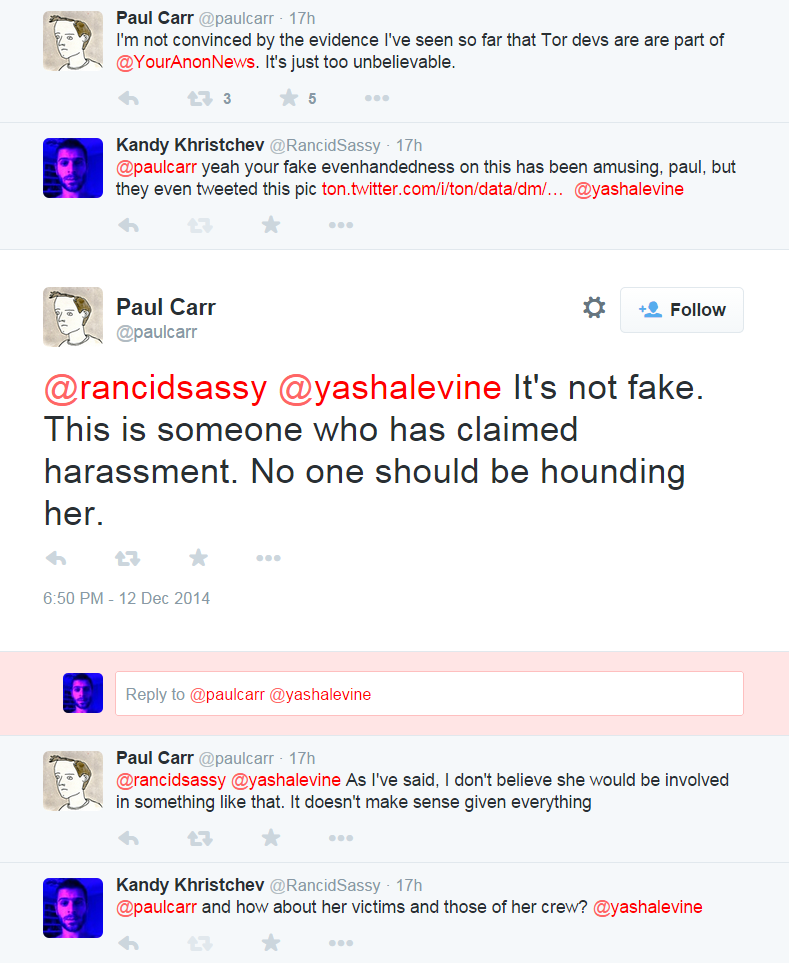 Carr included and called “ludicrous” this next bit: 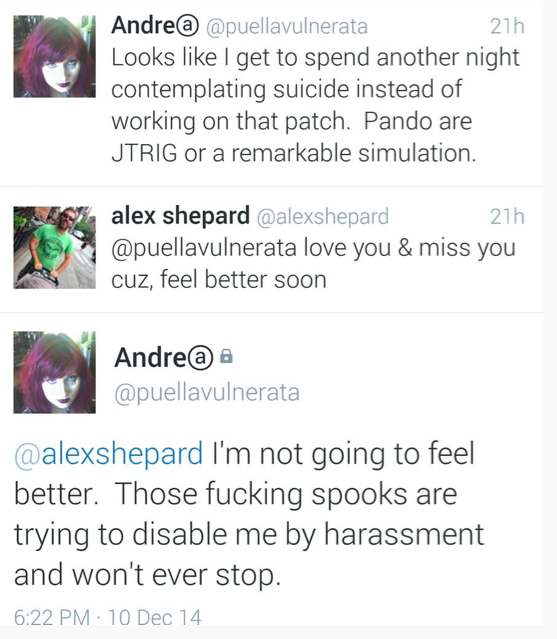 You only had to note the glee with which Shepard, from behind her locked account, continued her war against JB — her real-life victim — and called for further doxxing of all Tor critics and JB’s advocates to view with suspicion of calculated drama her “suicide” tweets. Some proof is here and there, but a little thinner now that she has successfully had the @DoxySpeculo account, which documented all of this via a mole in her followers, suspended from Twitter.

I don’t care to keep getting into the interpersonal parts of this mess, as I could go on another several thousand words and nobody cares that much. But the evidence up until now shows we are expected to entrust, in this digital world, absolutely every fucking thing in our lives to what is essentially a mob of vindictive, anti-social creeps doing opaque work for the world’s most evil state and its right-hand corporations. I have no choice but to use their products but I do not have to abide their ridiculous narratives, which read like a lie a 4-year-old might tell about hitting his little sister.

Lee repeated the TorGate standby strawman that critics claim the project’s military and intelligence-agency funding itself is what directly compromises Tor. No. The question is why it has this type of funding to begin with, to the tune of nearly its entire budget. The funding itself is not undermining in the same way it is in a field like journalism. But when Tor stops being useful to the Department of Defense, it will stop funding Tor. Conversely, as long as the millions flow, we can assume the world’s most vicious, murderous organizations find Tor more useful than not. And that is the question, so wrapped up in morality and non-Internet politics, that nerds desperately don’t want to have to address.

Paul Carr clarifies that he in fact has no higher ups and he made the decision to run Quinn Norton’s dumb Tor propaganda all by himself.

@rancidsassy @umfuld Uhh. You realize there's no "higher up" who can order me to do anything, right? I'm the editorial director of Pando.